As a child, I used to sneak off into my Dad’s wardrobe and put on his ties. Formal wear adorned, I would address my teddies at a fantasy party conference. I used to learn extracts from historic political speeches and, in my best impression of 20th Century Prime Ministers, recite them (Neville Chamberlain was an inexplicable favourite).

It was always a dream, then, to work in parliament. I have only been here a few weeks and already scenes of my wildest childhood imagination have played out. On my second day, I saw the Speaker of the House fist-bump a former shadow-chancellor. I stood in a room on Monday which seemed to me to be almost entirely made of gold.

And yet in the buzz and hum of this exciting new world, things came to a halt on Friday. The tragic news of the death of David Amess would always have been bitter and shocking. However, I felt it reverberate through me in a way I had not anticipated. Perhaps it was because suddenly I was not playing politics but had now had the privilege of seeing parliamentarians being people. Chomping on sandwiches, apologetically pulling on facemasks as we entered lifts, embracing their friends. It felt close.

So, I am struck by two things. The first is the obvious but crucial reflection that Sir David was a person, and not only a public figure on TV. With all of the human paraphernalia that comes with that. He, no doubt, had a favourite colour, a meal he loved to cook and an anecdote he would tell over and over at parties. The thing to remember, then, is that this is true of all MPs and indeed all people.

I often resist the platitudes that can be offered by well-meaning but misguided friends who reflect that ‘everything happens for a reason’. I can think of no good reason that a person who committed his life to serving others, a human made up of dignity and love, should be killed in such a tragic fashion.

Nonetheless, I do believe in a God who brings chinks of light into darkness. When I think of Jesus, I am always struck by his choice of grace and forgiveness, even whilst he was being tortured on the cross. It is my hope that one such chink of light, in this undoubtedly dark situation, might be a renewed sense of our shared humanity. Vitriol towards those we disagree with politically will shed only heat. It is grace towards humankind that will bring light.

My second reflection is that in a world where there can be such sadness and injustice, we must continue to play the childlike games that taught us to love in the first place. When I go to work tomorrow morning, I will see flags flying at half-mast and I will grieve for that. But I will also see rooms apparently made of gold and old men I know from TV fist-bumping. And I will tell my twelve-year-old self that his playing brought me here. I will keep looking for those flickers of childlike joy, that hope, that belief in the possible. 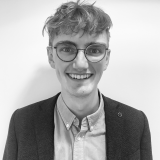