In the face of the large number of refugees currently displaced, our Christian understanding that we all have a common identity in God is as important as ever. We have a key role to play in highlighting the ongoing plight of refugees and displaced people and must affirm a human response to the crisis.

The Nationality and Borders Act 2022

In April 2022, The Nationality and Borders Act passed into law. Our Churches campaigned against this bill during its time in parliament, and together we have signed the Anti-Refugee Laws pledge. Together with hundreds of other organisations and charities, we pledge to:

Click here to read more about the Anti-Refugee Laws Pledge

Following Russia’s attack on Ukraine in early 2022, millions of people have been displaced from their home. A global effort to offer sanctuary to people made refugees by the conflict has emerged.

Click here to find out more about how you can respond and offer support.

Prayers for the Global Compact on Refugees 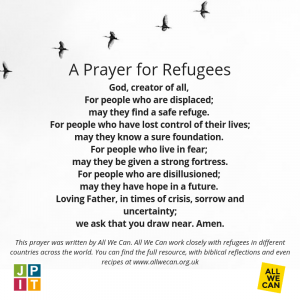 At least 79.5 million people around the world have been forced to flee their homes. This figure includes almost 26 million refugees.

Since 2016, the UN has been working towards a Global Compact on Refugees. This compact is intended to improve the way the international community responds to large movements of refugees.

In September 2018, the Compact was presented to the UN. It was affirmed by the United Nations General Assembly on 17 December 2018, and the principles have been updated for the Covid-19 pandemic.

Join us as we continue to pray for those who are displaced or seek asylum. Find our prayer resources here:

Prayers for the Global Compact on Refugees

We currently face a global refugee catastrophe of unprecedented nature, with 79 million people being forcibly displaced worldwide. People are fleeing conflict and violence in countries such as Syria, Yemen, South Sudan and many more. These people often face traumatic experiences as they try to make their way to safety.

As Christians, we must recognise that we are all made for goodness, and that human dignity of refugees is intimately connected to our own. We must acknowledged that there is no outsider, as neither geographic nor legal status can deny access to God’s family.

This Joint Public Issues Team briefing outlines the history and consequences of the current humanitarian crisis, and highlights how Churches can engage with the issue.

In 2017 the Churches issued a call to action on the worsening crisis in Greece.

In September 2016, over 200 faith leaders called on the Prime Minister to provide more help to refugees fleeing Syria, Iraq and other areas of conflict. The open letter included signatories from JPIT denominations as well as former Archbishop of Canterbury, Lord Dr Rowan Williams, who said “The refugee issue is not going to go away, however much we put our fingers in our ears and screw our eyes tight shut – that is not going to change. Turning people away does not solve the problem, it shifts the burden very often in the world we currently live in on to those less able to bear it than we are.”

The Bible is full of stories about refugees. Welcoming and loving those in need is central to the Christian faith. We have collected stories from refugees and Churches supporting refugees to see how this plays out today.

Email us if you have a story to share.

In 2015 it was announced that the United Kingdom would respond to the ongoing conflict in Syria, which is forcing millions of people from their homes. The UK Government pledged to resettle 20,000 vulnerable Syrian refugees over a period of 5 years through a scheme called the Syrian Vulnerable Persons Relocation Scheme (VPRS).

By February 2018, 10,000 Syrian refugees had been granted asylum in the UK under the scheme.